It's no secret that Oxford, Ohio loves its art. Back in July, the empty storefront windows up and down High Street were made colorful with creative, hand-painted murals featuring hummingbirds, abstract designs, and more. This fun display of artwork was such a hit among the community that we knew we had to do it again and what better time than winter? It's tempting to curse this time of year and the colder, shorter days it brings us. But round two of the window mural project is intended to help us embrace this season with art that reflects and celebrates all of the things we love about winter, from snow-covered cobblestone bridges to lights twinkling in the trees.

We once again put out a call for art, offered a stipend, and watched the impressive proposals from local artists pour in. The Public Arts Commission of Oxford narrowed down the submissions until seven talented community members had been chosen. In our call for proposals we called these murals a community beautification project, and these artists have proven that they were clearly up for the task. Goodbye barren storefront windows, hello giant works of art!

We recommend taking a walk through uptown to marvel at the murals in person. But in the meantime, enjoy the photos we've posted below and learn about each of the artists behind the work. 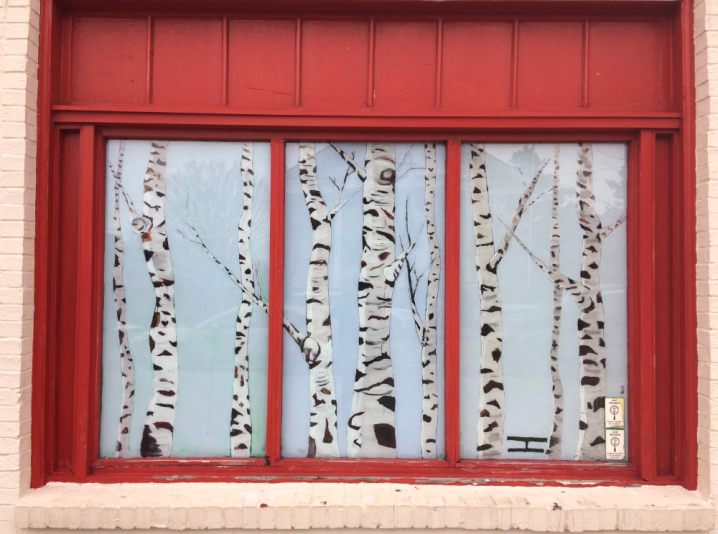 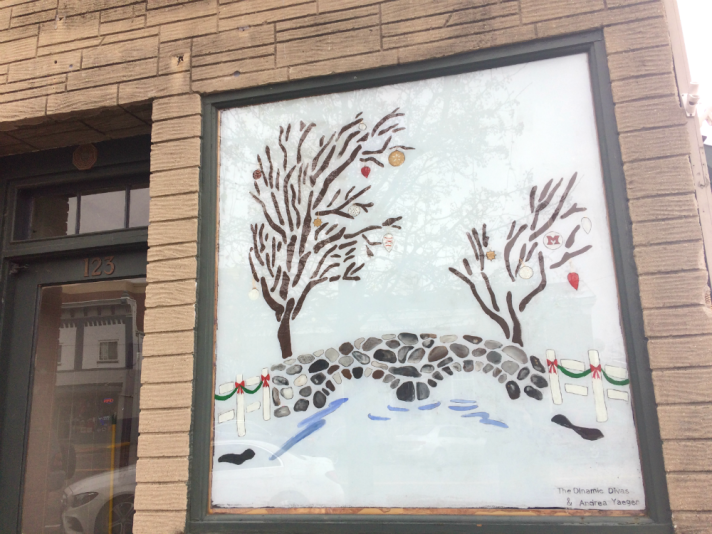 Andrea's always had a passion for art, which we think is pretty clear considering her gorgeous work uptown. She studied design in college and has been painting ever since. After years of running her own mural painting business, her family began to grow and so she started working from a home studio. She's originally from Cincinnati but we consider her one of our own. Not only has she lived in Oxford for the past five years but she also displays her love of the town through the Oxford-inspired murals on display in her Airbnb. Her daughter Isabelle, along with her Destination Imagination teammate Vivian, helped paint these winter murals uptown and will compete in a fine arts challenge this spring. Talent runs in the family! 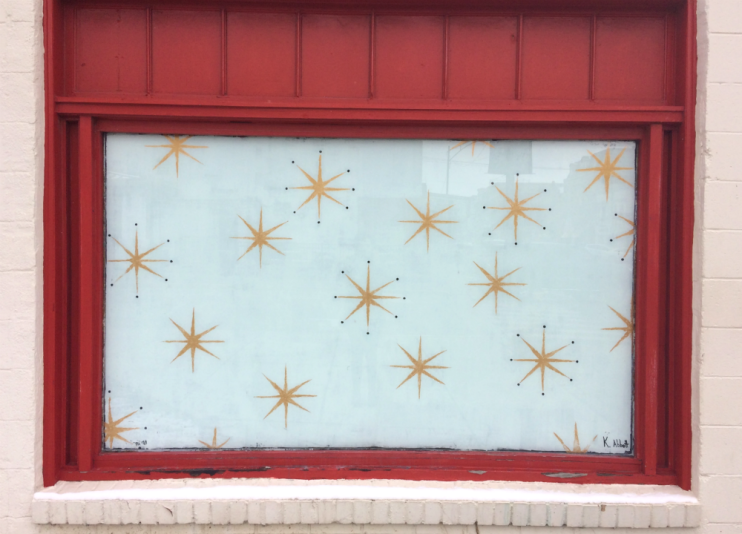 Katy's someone who's enjoyed making things her whole life, including ceramics in high school. After college, she began enjoying the art of glass bead-making, though she put down the torch when her daughter was born and instead began drawing and painting instead. She's back in Oxford after having lived in both Cleveland and Philadelphia with her husband (the two are Miami Mergers!) and now works as an assistant professor in the Sociology and Gerontology Department at Miami. Katy's murals typically represent mandalas, which she describes as "designs that appear in all cultures. Mandala is a Sanskrit word that means circle or center." Knowing this, Katy thought a mandala would be a perfect design for the uptown district (a.k.a the center of town).

Katy doesn't have any other art posted online, but she's a certified zentangle teacher and can be contacted for lessons! Her email is katy.abbott@icloud.com 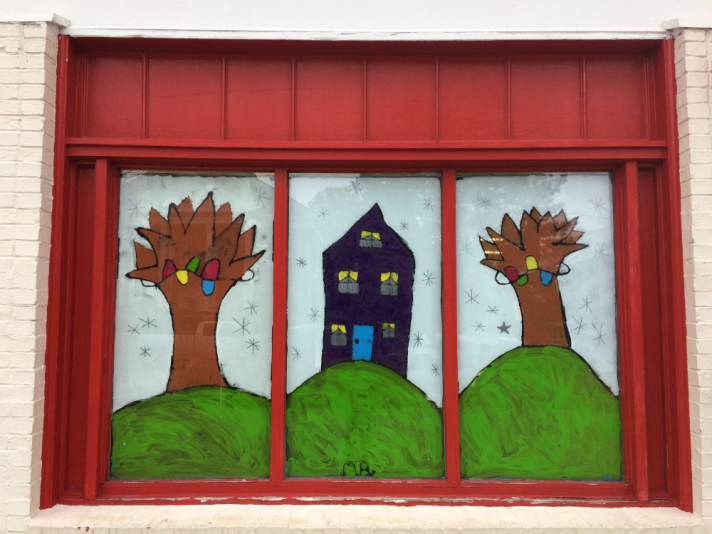 Mia, the talented daughter of Katy, is a star in the making! She's been painting and making art for as long as she can remember, recalling when her mom let her fingerpaint in the kitchen when she was little. She's lived in Oxford for four years after moving here from Philadelphia for her mom's job. She goes to school and enjoys playing soccer and basketball, as well as hanging out with her friends. Her mural is inspired by her years in Pennsylvania where she experienced lots of snow days. She wanted her mural to fit with this year's "Winter Lights" theme, treating us all to some truly lovely artwork of a cozy home surrounded by trees strung with colorful lights! 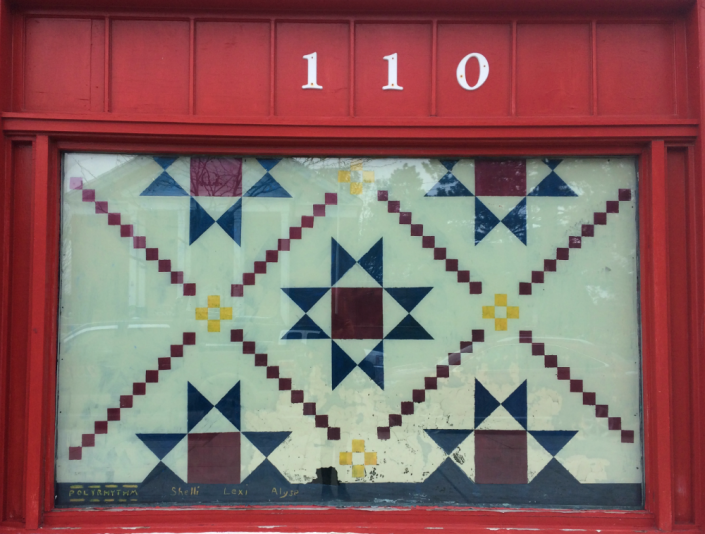 Alyse has been making art her whole life, though she says she's only been making art that looks good for the past eight years or so, in part due to the design theory and technique she learned while pursuing a graphic design degree at Miami University. (She now gets to create new things every day at her graphic design business!) Her beautifully patterned mural uptown is influenced by her grandma, Mim, who expressed her creativity through quilting and even helped Alyse make her own quilt when she was young. Because of this, winter for Alyse now conjures the image of quilts and the feeling of coziness they provide. Though she's now moved to Cincinnati, Alyse still loves Oxford and visits often. She says, "Brace yourself for the cheesy: Oxford will always have a special place in my heart."

You can see more of Alyse's work on Instagram. 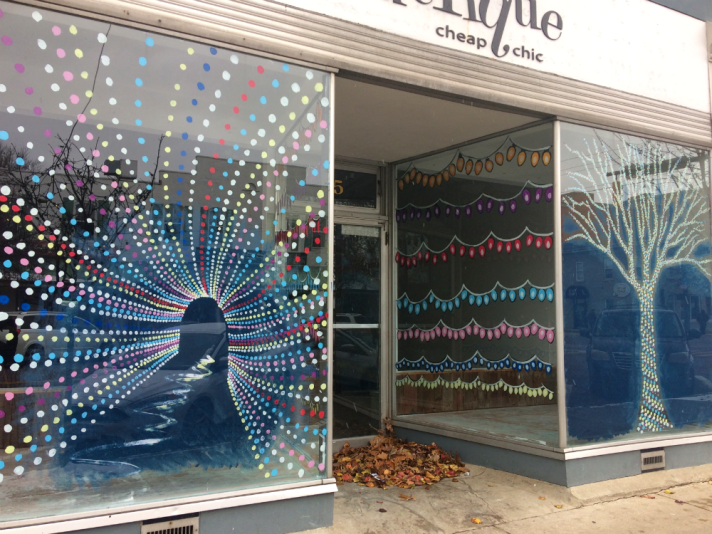 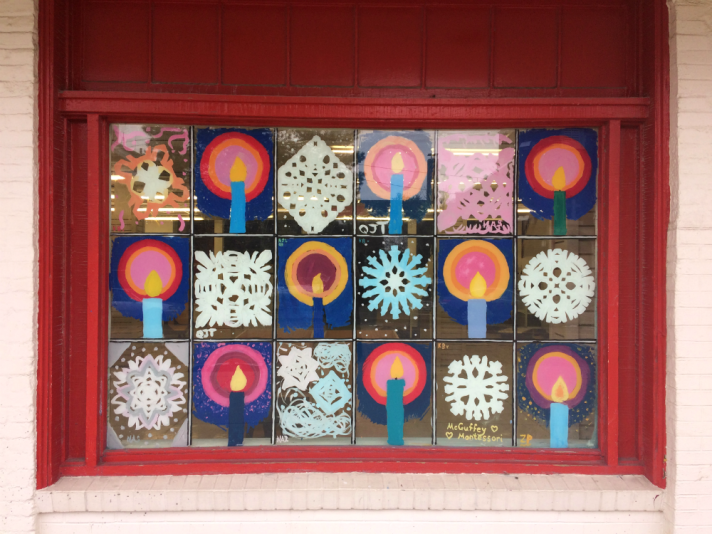 Amy's had an urge to create since childhood, when she would approach her mom on idle weekends and say, "I feel like making something." She's now the art teacher at McGuffey Montessori, where she presented her students with the opportunity to participate in the uptown window mural project. After coming up with the general design for the students' mural, Amy had each student customize their own snowflake or candle to give each panel a personal, unique touch.

Amy's own mural is a dazzling display of glowing winter lights that cover the entirety of four large windows. Influenced by light exhibits she's experienced in the past, Amy wanted to bring the tunnel of lights to life by creating a trick of the eye. Safe to say it's a success because we feel like we could walk right through the glass!

You can find Amy's work on Instagram or stop by her studio at the Oxford Community Arts Center to see her custom design sewing. 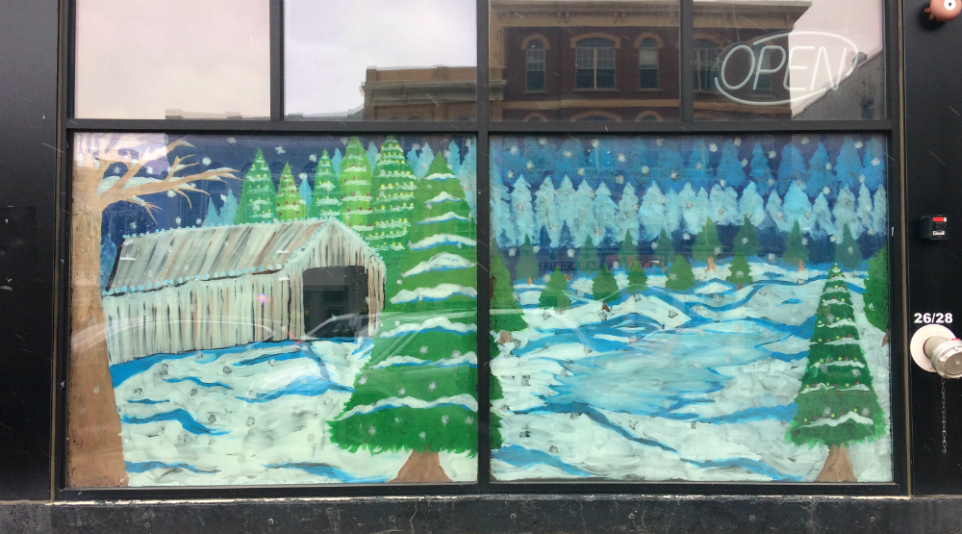 Katherine's 10 year art anniversary in coming up this February! She knows this because she started pursuing art in the second semester of seventh grade, and hasn't stopped since. She lives just a stone's throw away, residing in College Corner and working in the Oxford Walmart. She may not technically live in Oxford but she's definitely a valued community member, having been involved in town from a young age due to her mother working at Miami University and her attendance at the Cobblestone Community Church. We're so grateful to see her larger-than-life artwork on High Street uptown, based on the covered bridge by the Miami University stadium.

You can find more of Katherine's work on her website. 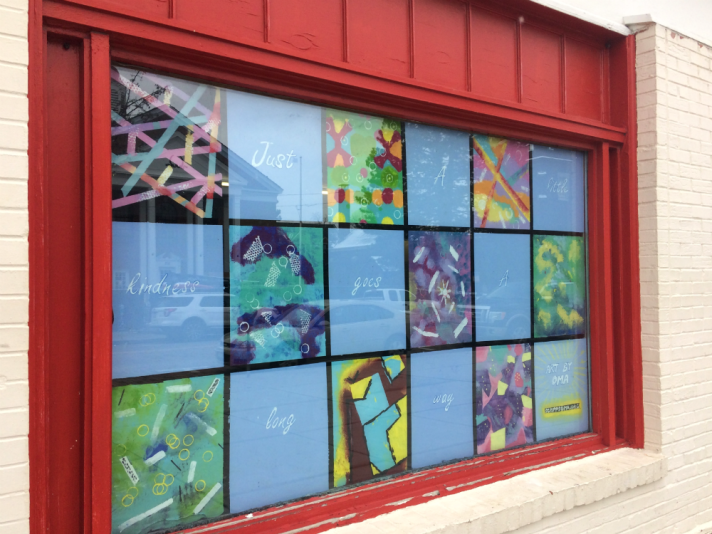 This stunning collage is compiled of separate pieces of art originally created by participants of the Opening Minds Through Art program (and then recreated by the participating mural painters). Isabel Aste, who submitted the mural proposal on behalf of the program, describes OMA as an intergenerational art-making program for people with Alzheimer's disease and other forms of neurocognitive disorders. There's no wrong way to creatively express oneself through this failure-free program that has been serving the Oxford community for 10 years. This mural is a beautiful way to showcase elders' talents to the community and spread awareness of the OMA's impact in the area. Additionally, as Isabel puts it, "We wanted to share the spirit of spreading kindness and joy that we strive for in OMA." 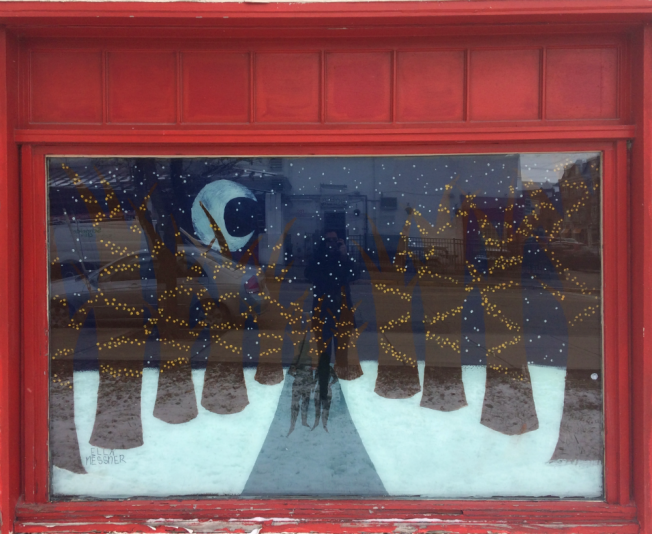 Ella is a talented high school student who's participating in our uptown mural project for the first time. We couldn't be happier with how she's transformed one of the windows of the old Follett's building into a twinkling winter wonderland. It makes us wish for more snow just so we could experience the magical scene in real life. Many thanks to Ella for finding the time amid an undoubtedly busy end-of-semester schedule to make our uptown a little more beautiful! 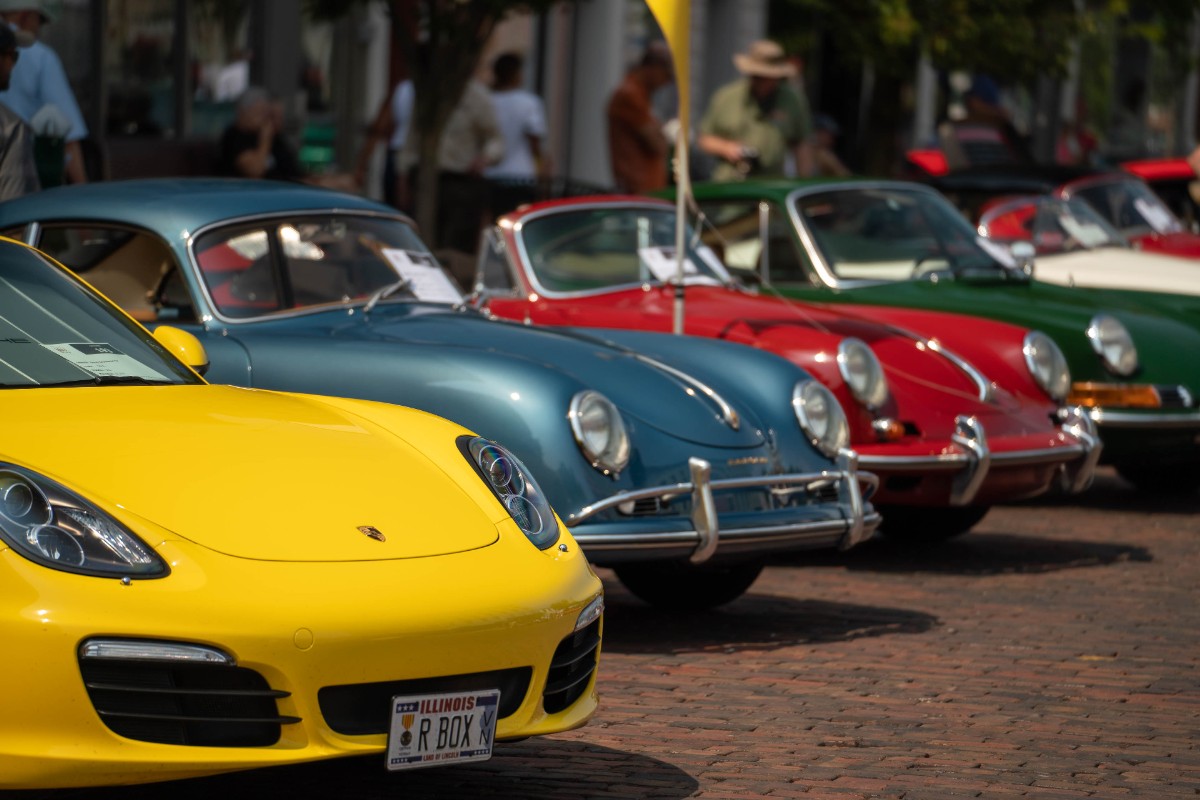 Self-Guided Driving Tours We hope you enjoyed seeing friends and making new ones while admiring Porsches on the iconic brick-lined streets of Oxford. But after being parked all day, aren't you...

JUNE 10 | JULY 1 | AUGUST 5 | AUGUST 26 We're excited for the 3rd season of Red Brick Fridays, an outdoor experience that allows you to support your favorite Oxford businesses while spreading...